skip to main | skip to sidebar

For the past few weeks, for one reason or another, I have been thinking about poetry and grief—or more specifically, about poems which register and express grief over the loss of a loved one. I have been especially attuned to lyric poems—concise and precise articulations of the emotions involving loss that provide what Robert Frost once called “a momentary stay against confusion.” (Incidentally, Frost also once observed: “Poetry is about the grief. Politics is about the grievance.”) The Irish may not have the market cornered on this sort of poem, but Irish writers have certainly turned out their fair share.

One obvious example, frequently anthologized, is Seamus Heaney’s “Mid-Term Break,” an early poem in which he recalls the death of a younger brother struck and killed by a car while the future poet, still just a boy himself, is away at boarding school. The poem leads the rea

der through the whole experience—from the news reaching young Seamus at school, through his being driven home by neighbors, then seeing his father in tears and being embarrassed by “old men standing up to shake my hand // And tell me they were ‘sorry for my trouble.’” What stays with the reader, however, is neither the glimpse of the poet’s distraught mother coughing out “angry tearless sighs” nor even the arresting image of his little brother in the first two lines of the final tercet—“Wearing a poppy bruise on his left temple, / He lay in the four foot box as in his cot.” Rather, reinforced by full rhyme with the penultimate line of the poem (“No gaudy scars, the bumper knocked him clear”), the recognition etched in the standalone final line is also etched indelibly in the reader’s memory: “A four foot box, a foot for every year.” In his essay “Hamlet and His Problems,” poet T. S. Eliot describes the challenge faced by the artist attempting to convey a complex and subtle emotion: “The only way of expressing emotion in the form of art is by finding an ‘objective correlative’; in other words, a set of objects, a situation, a chain of events which shall be the formula of that particular emotion; such that when the external facts, which must terminate in sensory experience, are given, the emotion is immediately evoked.” Acknowledging the almost unspeakable sadness of a child’s death, the equation that Heaney draws between his brother’s life cut short and the miniature coffin he lies in reads as a classic example of Eliot’s idea.

The objective correlative may not be the only way to express publicly an emotion as private as grief, but it certainly works in “Reo” by Seán Ó Ríordáin, considered by many read 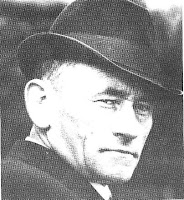 ers and scholars the preeminent Irish-language poet of the twentieth century. In an essay on Ó Ríordáin in his book Repossessions: Selected Essays on the Irish Literary Heritage, Professor Seán Ó Tuama observes that in this poem “Ó Ríordáin consciously or unconsciously reverses and transforms one of the oldest European love-formulas, that of the poet walking out one leafy summer morning and meeting a fair lady. Here it is a winter morning, frost in the air, the boughs bare and he encounters not love but death. . . . This is quite probably . . . [a] lament for his mother, beautiful, unique, and absolutely in the Irish as well as in the European tradition.” Translated as “Frozen” by Valentine Iremonger, in its matter-of-factness “Reo” requires no paraphrase:

On a frosty morning I went out
And a frozen handkerchief faced me on a bush.
I reached to put it in my pocket
But it slid from me for it was frozen.
No living cloth jumped from my grasp
But a thing that died last night on a bush,
And I went searching in my mind
Till I found its real equivalent:
The day I kissed a woman of my kindred
And she in the coffin, frozen, stretched.

Interestingly, in his recent translation of “Reo,” Greg Delanty substitutes for “equivalent” the word “correlative”—a telling nod toward T. S. Eliot in this poem in which the disconcerting frozenness of the handkerchief transmits to the reader the disconcerting personal loss that is the poem’s true subject.

For both Patrick Kavanagh and James Joyce, the loss of a beloved father likewise demands an expression of grief more crystallized than discursive. In “Memory of My Father,” K 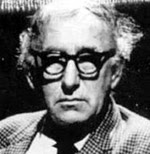 avanagh invites the reader to see the personal in the same way that he does—relative to the universal:

Every old man I see
Reminds me of my father
When he had fallen in love with death
One time when sheaves were gathered.

For Kavanagh, the absence of his father (who died in 1929, ten years before this poem was written) is accentuated poignantly by various paternal avatars whom the poet encounters randomly: “That man I saw in Gardiner Street / Stumble on the kerb,” “the musician / Faltering over his fiddle / In Bayswater, London.” Paradoxically, his father becomes an enduring presence by way of the familiar figure cut by these men.

For Joyce, the objective correlative resides in a different sort of universal—in the cycle of generational death and birth illuminated for him by the birth of his grandson Stephen shortly after the death of John Joyce, the author’s father. In a letter written in Paris on January 1st, 1932 (coincidentally, to T. S. Eliot), Joyce explained how his sorrow over his father’s death two days earlier was compounded by guilt over his rigid adherence to self-imposed exile from Ireland: “He had an intense love for me and it adds anew to my grief and remorse that I did not go to Dublin to see him for so many years. I kept him constantly under the illusion that I would come and was always in correspondence with him but an instinct which I believed in held me back from going, much as I longed to.” Six weeks later, on the day his grandson was born, February 15th, Joyce captured in the concluding quatrain of his succinct four-stanza poem “Ecce Puer” (Latin for “behold the boy-child”) the essence of filial grief:

But the poem of Joyce’s that I keep returning to with regard to the expression of grief is one that he wrote in 1904, in response to the death of his mother, Mary Jane (“May”) Murray Joyce, in August of 1903. Joyce originally titled the poem “Cabra,” after the northside Dublin community where the family was living (at 7 St. Peter’s Terrace) at the time of Mrs. Joyce’s passing, and originally intended to include it in his volume Chamber Music, published in 1907. But fee

ling that its sober tone did not fit with the rest of that gathering, he withdrew it and withheld it from publication until 1927, when he placed it, re-titled “Tilly,” at the opening of his 13-poem chapbook Pomes Penyeach. (The word “tilly” means “a little bit extra”—which seems to be how Joyce thought of this poem relative to the others in the volume, which were all written between 1912 and 1924 in Trieste, Zurich, and Paris.)

Comprising three free-verse quatrains, “Tilly” begins with a two-stanza depiction of a cattle drover written from the perspective that Joyce has his character Stephen Dedalus describe in A Portrait of the Artist as Young Man as the “dramatic form”—the literary point of view in which “The personality of the artist . . . refines itself out of existence, impersonalizes itself, so to speak”:

He travels after a winter sun,
Urging the cattle along a cold red road,
Calling to them, a voice they know,
He drives his beasts above Cabra.

The voice tells them home is warm.
They moo and make brute music with their hoofs.
He drives them with a flowering branch before him,
Smoke pluming their foreheads.

Crucially, though, the third stanza represents a shift in perspective to what Stephen Dedalus calls “the lyrical form”—“the form wherein the artist presents his image in immediate relation to himself”—as the introduction of the first-person point of view (the “I” in the third line) reflects Joyce’s acknowledgement of a profound personal investment in the poem’s subject matter:

Boor, bond of the herd,
Tonight stretch full by the fire!
I bleed by the black stream
For my torn bough!

In effect, the broken-off branch used by the drover as a switch to steer the cattle homeward becomes for the speaker in the poem (ostensibly Joyce himself) what Stephen Dedalus calls “the simplest verbal vesture of an instant of emotion”—the emblem of what has been irreparably broken in the life of the speaker: it becomes what the alert reader might recognize in other words as an objective correlative for irreversible loss. Read this way, this “tilly” of a poem written in 1904 stands not only as a subtle lyric poem in its own right but also an intriguing companion piece to the “Telemachus” episode of Joyce’s masterwork Ulysses, set on the morning of June 16th, 1904, which focuses in large part on Stephen Dedalus’ unresolved feelings of grief—like Joyce’s own—regarding the death of his mother almost a year earlier.
Posted by Thomas O'Grady at 8:00 AM

I love this piece very much.

I kept him consistently under the impact that I would come and was always in interaction with him but an instinct which I regarded in organized me coming back from going, much as I desired to.the icon of what has been irreparably broken in the way of life of the speaker . love this would read again

Thomas O'Grady
Thomas O'Grady is Professor of English, Director of Irish Studies and a member of the Creative Writing faculty at the University of Massachusetts Boston. He has written widely on Irish literature and culture. A native of Prince Edward Island, he also writes occasionally on Canadian literature and culture. An after-hours jazz guitarist, he also writes on jazz and other musical matters. (His jazz-related essay "My Coeval Archtop" was listed among "Notable Essays of 2007" in the anthology Best American Essays 2008.) His short fiction and poems have been published in a wide variety of literary journals, and his first book of poems What Really Matters was published by McGill-Queen's University Press in 2000. His second book of poems, Delivering the News, was published by McGill-Queen's in March of 2019.